The idea came to him following a trip he made to Venustempel, the world’s first sex museum in Amsterdam, as well as New York’s Museum of Sex and Japan’s Festival of the Steel Phallus. “Other countries can openly talk about it — [so] why can’t we?” he said.

Read: Let’s Talk About Sex: Meet the woman behind the movement to legalize sex toys in Thailand

Recently, however, Watjanasin followed up with his original project by launching another venue last December: the Museum of Sex, which he opened to tell the true story of sex in Thailand, since he felt that his original gallery space lacked a cultural story connected to the nation’s long history.

Together, says Watjanasin, the two venues have one combined mission: to break taboos, and advocate open discourse about sex. 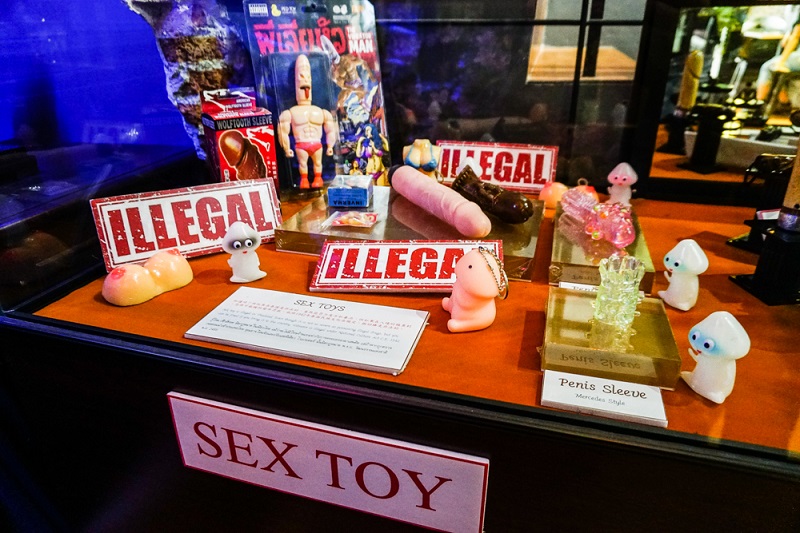 Near exit No. 3 of BTS Thong Lo, behind the newsstand next to the camera shop, sits a small courtyard. Walk inside to find the Green Lantern Cafe. Only, this cafe doesn’t just offer coffee and tea — go inside, and you’ll find that it actually houses Bangkok’s one-of-a-kind Museum of Sex.

Walk past the coffee counter, and you’ll see a stone carving of Apsara, the “prostitute of the heavens” — and right next to it, a display cabinet filled with sex toys and palad khik, or penis-shaped talismans. This is where the Museum of Sex tour begins.

“I visited temples and asked people around [there] where I can see these murals,” Watjanasin said, pointing to a mural painting he saw at Wat Kongkaram in Ratchaburi province.

Inside another room is an informative exhibit that details the lesser-known sex-themed stories of traditional Thai literature and lore.

“Do you know that in the past we called the vagina, ‘frog’?” Watjanasin asked us, as he led us towards his own artwork depicting a vagina-looking frog. Or is it a frog-looking vagina?

In one corner of this room, the collection covers a brief history of Thai brothels tracing back to the early Rattanakosin period, when the Sampeng area alone had up to 40 registered bordellos — that is, before the profession of prostitution became officially outlawed in the 1960s. We learned that back in the day, it was common practice for the brothels to hang green lanterns at its front doors to signal that the establishment had already paid its taxes – hence Watjanasin’s chosen name for the cafe/facade that visitors go through to enter the Museum of Sex.

Admission to the Museum of Sex is free, as long as visitors buy a beverage from Green Lantern Cafe first. According to Watjanasin, most of the visitors he’s had so far are foreign tourists, and the number of Thais coming in has been fairly low.

Speaking about the foreign visitors, Watjanasin said: “After they get tired of shopping malls, they look up on the internet for something different and they find this place. They really like it — some of them even came back to donate some things for the museum.”

Watjanasin said that the collection — viewed as priceless by him and his father — never won full approval from the rest of the family, however: “My mother and my siblings never wanted to get involved with any of this. I was the only one who helped my father arrange the stuff.”

Admission to Kamavijitra is THB500, and available by appointment only.